National High-Speed Rail Corporation Limited (NHSRCL) was incorporated on 12th February 2016 under the Companies Act, 2013 with an object to finance, construct, maintain and manage the High Speed Rail Corridor in India. The Company has been modelled as ‘Special Purpose Vehicle’ in the joint sector with equity participation by Central Government through Ministry of Railways and two State Governments viz. Government of Gujarat and Government of Maharashtra.

The High-Speed Rail (HSR) project apart from being a technological marvel, would afford many quantifiable benefits like saving in travel time, vehicle operation cost, reduction in pollution, job creation, reduction in accidents/ enhanced safety, imported fuel substitution, and reduction in pollutants. The project would also boost the infrastructure and add to the growth of economy. HSR would be an integrated system having overall optimization of various components, viz. Hardware, Software, Human-ware, and their interface, etc.

The Company would require a manpower strength of about 3000 - 4000 officials (estimated) for executing the operations of high-speed corridor. The requisite manpower would need to be highly proficient in implementation of high-speed technology so as to execute the project efficiently and effectively. Therefore, the Company has started construction of an exclusive training institute at Vadodara to cater to this aspect.

The Company would be ushering India into the category of few countries of the world (about 15) using High Speed Railway System.

Our latest annual report can be found here

NHSRCL Brochure can be found here

There are a number of social and economic benefits that comes with the introduction of High-Speed Rail. Most recent examples are from Japan, Europe and China where high-speed rail has done wonders for the common citizens by providing high speed connectivity between various towns and cities.

Social Benefits: There are a number of positive externalities of high-speed rail like economic travel, reduced CO2 emission, comparatively less land required than a 6 lane highway for same passenger capacity and employment generation because of higher economic activity and faster connectivity.

Economic benefits: Transportation by HSR would be powered by indigenous electric power unlike diesel/petrol and aviation fuel need by cars and airplanes, which is largely imported. This will benefit the Indian economy and reduce its relevance on imported fuel.

According to a study conducted by London School of Economics and Political Science and the University of Hamburg researchers, towns connected to a new high-speed line saw their GDP rise by at least 2.7% compared to the neighbors not on the route. Their study also found that increased market access through high-speed rail has a direct correlation with a rise in GDP-for each 1% increase in market access, there is a 0.25% rise in GDP. Their research was focused on the line between Cologne and Frankfurt, which opened in 2002 and runs trains at a speed of 300 Kmph.

Ridership: NHSRCL aims to change modal transport system share in intercity travel through the introduction of High-Speed Rail. We aim to divert/introduce passenger traffic from three components. The diverted demand, which derives from the travelers’ mode choice diversion toward HSR either from other modes (e.g. Cars, Air) or other rail services (e.g. Intercity); the economy-based demand growth, which is linked to the trends of the Indian economic growth, under the assumption that the more wealthy the people the more they travel; and the induced demand which depends either “directly” on the generalized travel cost, or “indirectly” on modifications of the travelers’ mobility or lifestyle choices. 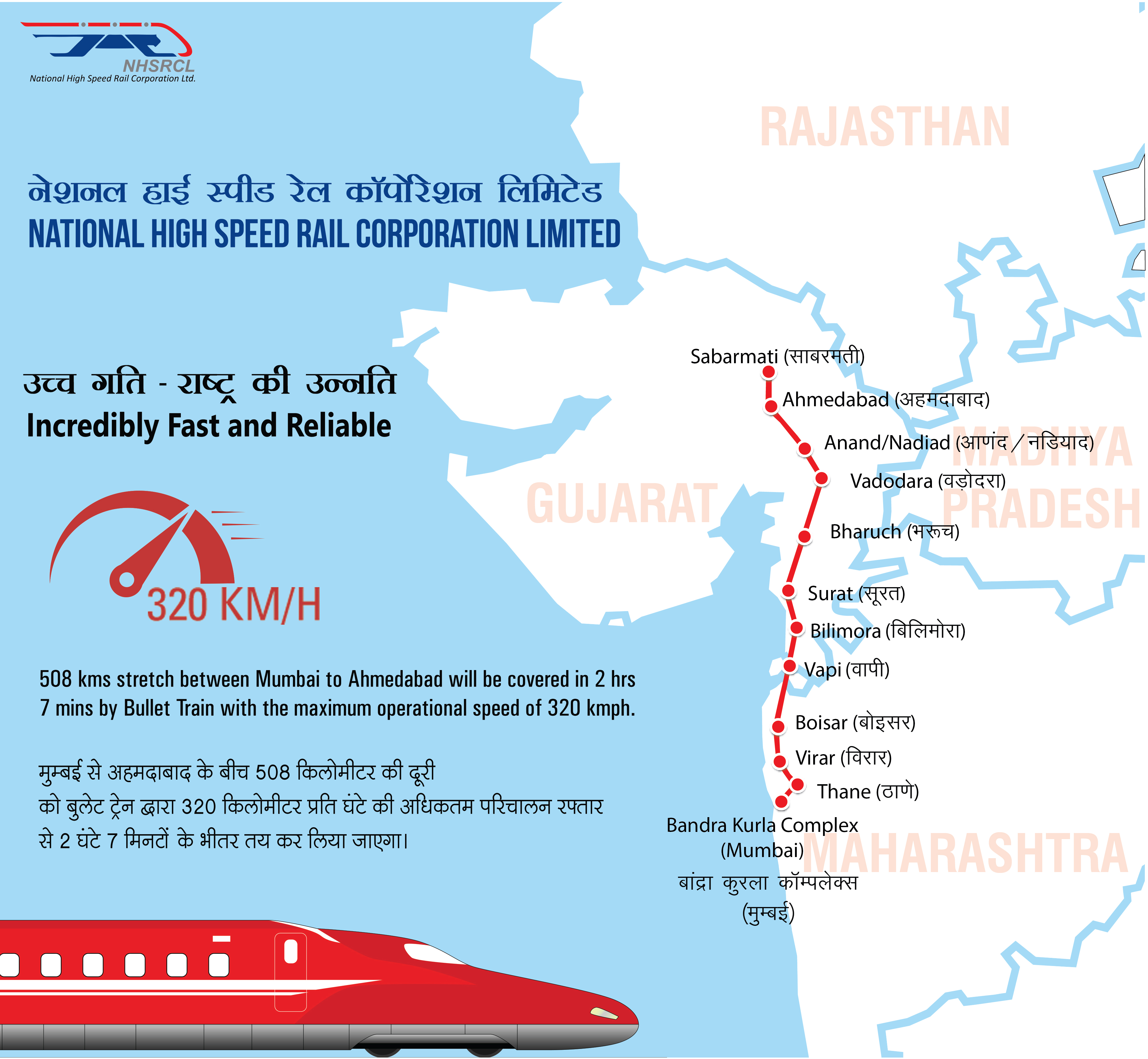